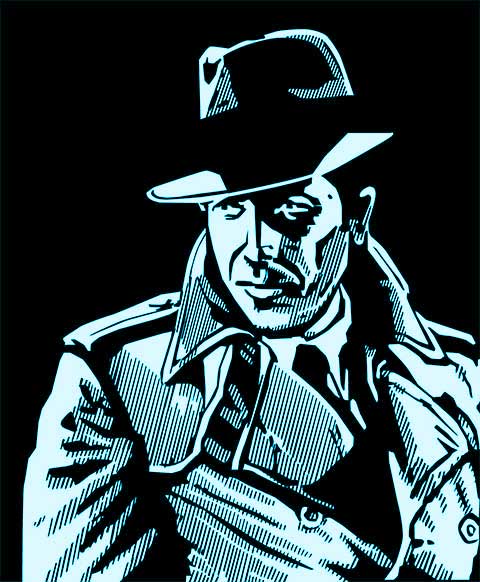 Suzanne Dare had given me enough money to buy a new pair of shoes and a nice dinner, so I picked up a fresh pair of wingtips, and in the evening, I went over to Kelly’s Tavern and had some drinks. Later, I strolled over to the Dare mansion. It was quite a piece of work, complete with marble lions by the front gate and a beautifully maintained garden. I’d heard Dare had won it in a poker game in Versailles during a concert tour and blown most of his fortune having it shipped to America. Tonight it was crawling with cops the way an anthill crawls with ants. You would’ve thought a donut truck had overturned in the driveway. I spotted the Chief of Police and made my way over to him. He didn’t particularly like me, and I didn’t particularly like him, but we had a sort of professional respect for each other.

“Hey, Mackerel, you steaming pile of monkey dung. What brings you out here? The smell of death?”

“Nice to see you too, Chief. Just thought I’d drop by to chat. How’s your wife? She still call out my name in her sleep?”

“Look, Mackerel, I’m kinda busy, OK? I’ve got a murder investigation on my hands and to complicate matters, five minutes ago, some outta control bakery truck comes careening up the driveway and dumps its load all over the front lawn. There’s crullers everywhere.”

“Sorry to bother you on your lucky day, but I was wondering what your boys have come up with regarding the Dare murder.”

“Why? What’s your interest in this case?”

“It’s strictly personal. I was a big fan of Philip Dare.”

“You, a piano aficionado? I never woulda guessed.”

“Oh, yeah. When he played chopsticks, it brought tears to my eyes.”

“Yeah, right. Listen, Mackerel, I don’t know what you’re up to, but you better stay outta my hair.”

“That should be easy, considering.”

“Considering wha… Hey! I do not wear a rug! This is my natural hair! Now get outta here before I take you down to the station and test out a new piece of rubber hose.”

I didn’t expect to get much out of the Chief, so I wasn’t disappointed. I decided to cash in a favor one of my pals down at the precinct owed me. I hoofed it back to my office and rang him up.

He answered on the third ring. “Lieutenant Malloy here.”

“Well, that’s a fine how d’ya do for the guy who bailed you out at your son’s fifth birthday party.”

“Hey, I was a great clown considering I had such short notice.”

“Great clown? You weren’t wearing makeup, you were smoking a cigar, and the only trick you knew started with the words ‘pull my finger.’”

“That’s ’cause you let them fire your revolver!”

“Hey, wait and see who he asks for next year.”

“What d’ya know about the Philip Dare murder?”

“Someone cracked him over the head with a bust of Mozart.”

“Whatever. Hey, what do you know about this?”

“Just what I read in the papers. So, d’ya have a suspect?”

“We think it was his wife.”

“He was going to divorce her, and she was afraid of being left without a cent, so she cracked his skull and tried to steal his gold fillings. What she didn’t know was he didn’t have any.”

“What the hell are you talking about?”

“He apparently took good care of his teeth. He didn’t have a single cavity.”

“So, what d’ya mean she tried to steal his fillings?”

“His teeth were pulled out. We think the wife was after his gold fillings, only there weren’t any. You know how woman are with precious metals.”

“Hey, every Christmas, my wife asks for a gold watch or a gold bracelet or…”

“No, no, no. The theory is ridiculous. First of all, don’t ya think his wife coulda found something else to pilfer if she wanted money so bad, and secondly, don’t ya think she woulda known that he didn’t have any gold fillings?”

“Hey, my wife thinks I’ve got a tattoo of her on my butt.”

“Thanks for the imagery. What about other possible suspects. Did ya check out the cleaning woman?”

“Yeah, she has an airtight alibi. She was home alone sleeping.”

“What about the butler?”

“Apparently, he had some mob connections, but he says that’s in his past, and we believe him.”

“Did you guys turn up anything during your search of the house?”

“Nothing out of the ordinary.”

“How about some keys?”

“Keys? I don’t think so. Are you keeping something from me, Jack?”

“By the way, Rusty, when you see your kid, tell ‘em I want my revolver back. It’s my good one.”

I decided to head back over to the Dare mansion and see about taking a look inside. Maybe I could find a thing or two the cops had overlooked.

There was a guard posted by the front gate, but otherwise the house and yard looked deserted. I climbed the fence out back and lowered myself into the yard. Luckily, the moon was behind me so I was able to hide in my own shadow. Upon reaching the rear entrance, I took out a little box of tools I carry with me for such an occasion and used them to break a window. Unfortunately, the window I broke was too far from the door for me to reach through and unlock it, so I had to break another window. That one ended up being too high, so I proceeded to kick the door in. It was nearly off its hinges when I realized it was unlocked.

Once inside I used my trusty flashlight to look around. The police had done a thorough job — the entire pantry was bare. I made my way into the parlor, careful not to knock over more than one expensive vase. The beam of my light crossed the oriental rug and there it was, Philip Dare’s last composition— a blood stain the size of a medium pizza. That’s gonna be a bitch to clean, I thought.

I moved on to the drawing room and found some mail laying on top of a desk. Nothing too impressive — an invitation from some sheikh, a note from the Queen, and a thank you card from the President. On the back of one of the envelopes, however, was a scrawled note. It read simply “9:30 TUESDAY PETE.” Now things were getting interesting. Dare was murdered on Tuesday. Suzanne had said she heard the old man arguing with someone around 10:00. I knew if I could find this Pete guy, I’d find Dare’s killer and probably the missing keys.

I found a phone and called Suzanne at the number she’d given me. She answered on the thirteenth ring.

“Where were you?” I whispered into the receiver. “Out shopping for a new husband?”

“I was washing my hair.”

“If you dames actually washed your hair as much as you claim you do, we’d need an army of plumbers just to unclog the drains.”

“Very funny. Why are you whispering?”

“How’d you get past the cops?”

“Trade secret. However, you may notice it’s a little draftier in the kitchen than you remembered.”

“Did you find the keys?”

“Pete. Your husband apparently had a meeting with someone named Pete the night he was killed.”

“I don’t know anyone named Pete. Philip and I really weren’t on speaking terms for the last month. He rarely informed me of his meetings.”

“You sure you don’t know any Petes?

“Positive. I do know a couple of Peters though.”

“Listen, Mr. Mackerel, if you ran in my social circles, you wouldn’t have to ask that.”

“If I ran in your circles, I’d fall over and lose my lunch. Now tell me about these Peters you know.”

“One is seven and the other lives in London.”

“How strong is the seven-year old?”

“All right, all right. But I’m not ruling him out just yet. I’m gonna take another look around here. I’ll call you if I find anything else.”

“Fine, but I may be washing my hair.”

I searched the rest of the house with no luck. I couldn’t find anything to lead me to the mysterious Pete. I did, however, find Philip Dare’s concert piano, and it was, in fact, quite grand. It was crafted from some exotic wood and its legs were carved with intricate designs. Even in the dark it was beautiful. I sat down on the bench and imagined myself playing Heart and Soul to an audience of thousands. I could appreciate Philip Dare’s love of music.

As I sat at the piano, I began to feel like I was missing something. I started running the facts of this case through my head. Something didn’t make sense. I decided to sleep on it.

Join us tomorrow for the conclusion of Jack Mackerel and the Case of the Perished Pianist!