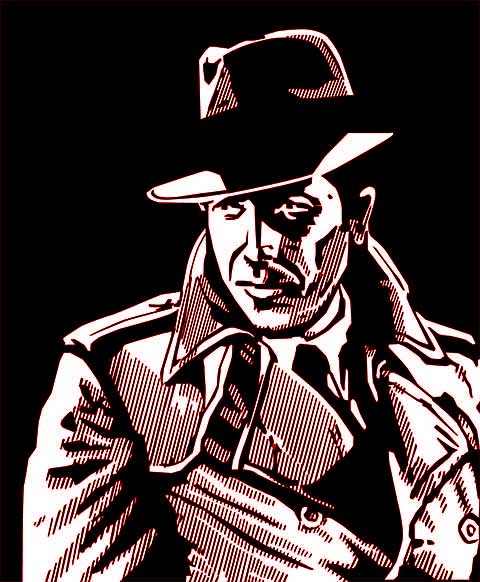 I awoke in the morning as the first rays of sun started to creep in. My back was killing me, but my brain was feeling great. In fact, I was fairly sure it had solved the case. I climbed down from the piano, made a couple quick phone calls, and by 8:15, I was standing outside a rundown office on the lower west side. The sign on the door said People for the Ethical Treatment of Elephants. I went inside.

A weary looking young man greeted me. It seemed he had an enormous weight on his conscience.

“Are you here to make a donation?”

“Actually, I’m here to make a withdrawal. What do you know about the Philip Dare murder?”

His face went white as a ghost at the sound of Philip Dare’s name.

“No. I’m a private eye. Name’s Mackerel, Jack Mackerel, and my guess is you’re Jake Merrick, the elephant guy.”

“You guess correctly, Mr. Mackerel. Now, if you’re not here to make a donation, I’ll have to bid you good day.”

“I’m sure I don’t know what you’re talking about.”

“Well, I’m sure you do. You met with Philip Dare last Tuesday night. He was a well-known philanthropist; I imagine you were hoping to get a big donation out of him. And in a way, I guess you did.”

Merrick was looking nervous. “I’m going to have to ask you to leave.”

I ignored him. “It never occurred to you that Philip Dare would actually be one of your adversaries, did it?”

Merrick began to look a little strange. There was fire in his eyes.

“He laughed at me when I asked for money,” he said in a voice dripping with anger. “He said it wasn’t in his best interest. He was a bad man, an evil man!”

It sure wasn’t taking him long to crack. I pushed on.

“So, that’s why you pummeled him to death with the head of a dead composer.”

“Yes! I did it for the elephants everywhere! And I’d do it again if I had the chance. But what tipped you off? No one saw me that night; I didn’t leave any fingerprints.”

“Well, Jake, I had a hunch. When I was little, the other kids made fun of me — called me Quasimodo. I spent a lot of time playing with myself. Sometimes I’d do it at the piano. After a while, I learned to play. When I sat down at the piano at the Dare mansion, I noticed it was short a few keys. Eighty-eight to be exact. Sure, there was a note from Mr. Dare saying they were out being cleaned, but I could tell he didn’t write it.”

“So where are the keys, Jake?”

“I packed them up for their trip back to Africa. I’m going to have them buried in the elephant graveyard with their owners. When Dare showed me his piano with its ivory keys, I became enraged. I demanded that he give the keys to me, but he laughed. He said that piano was worth a million dollars, and he didn’t give a rat’s ass about any dead elephants. That pushed me over the edge. When he went to call the police, I grabbed the bust of Mozart…”

“…and I hit him, again and again. Then I found some pliers and pulled out his teeth, so he’d know what it was like for the innocent pachyderms who’ve been slaughtered for their tusks.”

By now Merrick’s face was contorted, and he was drooling.

“Forget it, Mackerel. It’s your word against mine, and I’ll deny everything.”

“That’s where you’re wrong. The Chief of Police is outside that door.”

“You’re right. Actually, he’s only a Lieutenant, but he’s bucking for Chief. C’mon in Rusty.”

On my cue, Lieutenant Malloy came in and cuffed him. Merrick was raving like a madman by the time we got him in the squad car. I lit up a smoke and searched his office for the missing keys. I found them in a carved whale-bone box hidden under a beautiful mink coat. I guess you’ve gotta choose your cause.

Back at the office, I called Suzanne with the news. She was disappointed to find that there was no secret safety deposit box but thankful that I’d found her husband’s killer so she could get on with her life. She stopped by around noon to pick up the keys. She was dressed to the nines.

“Unfortunately, I get paid by the hour.”

“Don’t you worry. I said I’d make it worth your while.”

She handed me an envelope with more green in it than an American bar on St. Paddy’s Day.

“By the way, Jack, before I go, I wanted to tell you that I like your shoes.”

“Thanks. I bought them with the money you gave me. I’ve been wearing them since yesterday, and they’re killing my feet. I can barely walk.”

Suzanne just smiled and winked as she walked out the door.