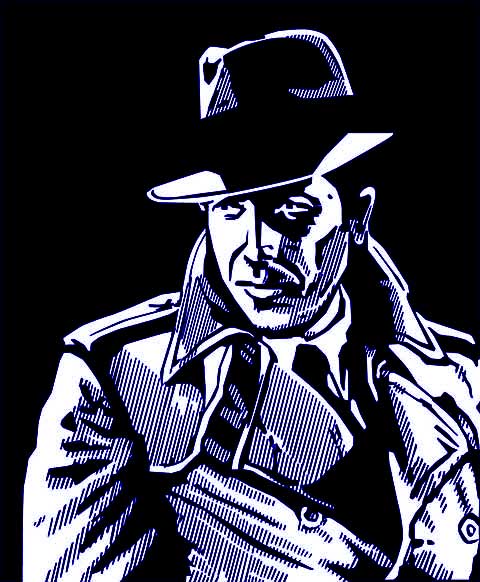 I knew it was payday because my mailbox was empty. If I didn’t get a case soon, I’d have to eat my other shoe, which wouldn’t be so bad except I’d have to get it out of hock first.

Little did I know, my luck was about to change…

She walked into my office dressed to kill. She had on a short black number with a bandoleer over her shoulder and a buck knife strapped to her waist. In her hand she held a snub nose .38 with the dangerous end pointing my way, and by the way she was holding it, I could tell she wasn’t here for my beer-for-guns promotion.

“I’d ask if I could help you,” I said between drags on my cigarette, “but you look like you can help yourself.”

“I hope you can,” she said coolly.

I took another long drag on my cancer stick. “What say you point that thing away from me, and I’ll see what I can do,” I said.

“Oh, does this make you nervous?” she asked with a devilish grin on her face.

“Listen, sister, nerve gas doesn’t make me nervous. In fact, in my line of work, a dame with a gun is like a nightcap before bedtime — relaxing.” I leaned my head back and took another long drag of tobacco.

“So, if you’re not nervous, why are you smoking an unlit cigarette?”

“I could ask you the same thing,” I said.

“Apparently, you don’t own a mirror.”

She pulled up a chair and lowered her piece. Upon wiping the sweat from my eyes, I realized that she was even more attractive than I had first thought. She had long red hair which she wore hanging from her head, and she had curves in all the right places.

“So, what’s a beauty like you doing packing heat?” I asked.

“It’s a long story,” she said. “I’ll tell you everything once you agree to take my case.”

“Well,” I said, “before I can agree to anything, I need to review all the facts and then decide if your case warrants my services. Plus, there’s ethical matters to consider, as well as time constraints and my other obligations. I don’t take just any case.”

She raised the .38 so I could admire the bore of the barrel.

I tipped my hat in her direction. “I’m Jack, Jack Mackerel. You’ll have to excuse me for not standing up, but I’m not wearing any pants.”

“That’s OK, neither am I,” she said as she crossed her slender legs, causing her dress to ride up her thigh. “I’m Suzanne, Suzanne Dare. So, Mr. Mackerel, do you always sit around your office without any pants on?”

“Only when I’m polishing my revolver.”

“I see,” she said, and I could tell from the way her big green eyes followed my every move that she wasn’t kidding.

“So, Miss Dare, what makes a hot number like you want to enlist the services of a private dick?”

“Somebody murdered my husband.”

“Sounds like a job for the boys in blue.”

“They think you offed your old man?”

“No, they think I killed my husband.”

“Do I look like a killer to you, Mr. Mackerel?”

“Not at all. Now why don’t you holster that gun and give me your story.”

She slipped the pistol into a holster under her dress, and I couldn’t help but wonder what else she might be concealing.

“Do-re-mi. Now, why don’t you tell me a little about your husband.”

“No, a pianist — with the philharmonic. You may have heard of him — Philip Dare?”

“You must be pretty loaded.”

“We weren’t as well off as people think.”

“Huh? I was just picturing you drunk. What makes the cops think you did him in?”

“They knew that he was planning to divorce me.”

“Looks like he did it the hard way. Why’d he want to lose a gem like you?”

“He found out I was fooling around on him.”

“What was wrong? His piano wasn’t grand enough?”

“He wouldn’t make love to me.”

“You didn’t mention he was blind.”

“Then what gives? You’re hotter than a black dashboard in the noonday sun.”

“He loved his music more than he loved me.”

“I’d like to see his music. So, why do you want me to find his killer? So you can thank him?”

“I never said I wanted you to find his killer.”

“Why else would you be here?”

“I want you to find some lost keys.”

“I’m not sure. Possibly a safety deposit box.”

“Someone killed your husband, and you want me to find some keys that you’re not even sure what they go to?” I was beginning to think this dame was nuttier than a Mexican sundae.

“The keys belonged to my husband. I believe they were what the killer was after.”

“What makes you think that?”

“I was up in my room the night Philip was killed — Tuesday night. I’d had a little too much wine for dinner and the three hours after, and I was trying to keep my bed from spinning out of the room. Around 10:00 I heard Philip arguing with someone downstairs. I heard a man yelling, ‘Give me the keys!’ I heard Philip threaten to call the police. And then I heard a thump, and Philip was moaning. And then another thump, and he was quiet.”

“Why didn’t you call the cops?”

“I was frightened. I thought he’d kill me too. That and I passed out. The cleaning woman found him in the morning before I came to. He’s been hit over the head with a marble bust of Beethoven.”

“So, why’d the police finger you as his killer.”

“The cleaning woman told them she’d heard me threaten to kill him.”

“Actually, I believe my exact words were, ‘Sometimes I’d like to take that damn bust of Beethoven and bash Philip’s brains in.’”

“A cool mill. During his argument the night he was killed, I heard him say something about a million dollars in reference to the keys.”

“Hadn’t your husband ever heard of a bank?”

“Yes, but he’d also heard of taxes. Philip didn’t like to share. He liked to hide his money from Uncle Sam whenever possible. Anyway, the way I see it, we never did get divorced so that money is mine now, and since I didn’t kill my husband, there’s not enough evidence to convict me, so I’d like to collect my money and start fresh — maybe open a vegan cafe.”

“Ah, the American dream. All right doll, I’ll take your case. I’ve always been a sucker for a beautiful woman with a gun.”

She pulled an envelope from her purse and pushed it across my desk. Here’s some cash to get you started and a number where you can reach me. However, if there’s anything else you need — and I mean anything — just give me a ring.”

It seemed a little premature for her to be talking about marriage before her husband’s body was cold, but then again, according to her, Philip Dare had been cold for a long time.

“I’ll find your missing keys, but you gotta make it worth my while.”

She stood up and leaned over my desk so that I could admire the looseness of her dress.

“Don’t worry Mr. Mackerel,” she whispered. “When I’m done with you, you won’t be able to walk.”

I wasn’t scared. I was pretty sure I could take her in a fight.

She sashayed over to the door, and before leaving, she turned, licked her lips, and winked. Then she was gone.

I went back to polishing my revolver.

Join us tomorrow for Part 2 of Jack Mackerel and the Case of the Perished Pianist!