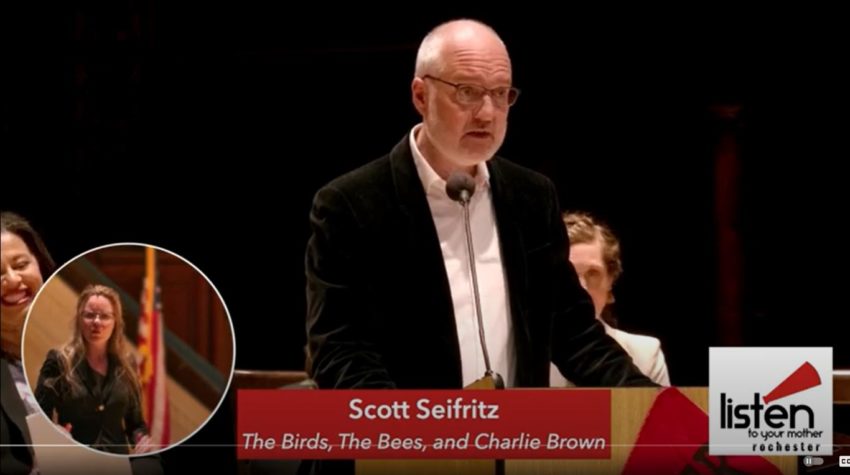 I think it was five years ago that my friend Evvy announced that she would be a cast member for that year’s Listen To Your Mother Rochester. (I agree, the “to” shouldn’t be capitalized, but that’s how they roll.) At the time, I’d never heard of the event. Some quick googling told me that the original LTYM was a show started in 2010 in Madison, Wisconsin, by Ann Imig (who I constantly want to call Ana Ng, thanks to the power of They Might By Giants).  At that first show, 11 local writers read their stories of mothers and motherhood. It was such a success that Ann licensed her product and a version of the show has since been produced in over 60 cities, where it often occurs annually.

Rochester’s been holding an annual LTYM event since 2015, and after Evvy was selected in 2017, I figured I’d audition the following year. I don’t typically write “feel good” pieces, but it seemed like that that’s what they were looking for, so I put fingers to keys and wrote a story about my mother. I suppose it was touching.

The next year, I auditioned again. This time I wrote a a humorous piece about procreation and the Seifritz household. I thought it was pretty funny. When I read it to the judges, I got some laughs.

Fine. They’re putting a show together and they’re looking for certain stories to achieve their vision. It doesn’t mean my story wasn’t good. It just means it wasn’t the right piece for that year. From attending the events, it seemed there were certain topics that got you in. In fact, my friend Kevin and I used to joke that before attending a show, we should make bingo cards that contained such topics as: fertility struggles, dead babies, dead mothers, relationship struggles with mothers, and the trials and tribulations of raising a kid. If you had those topics in the same column, you’d be sure to win.

In 2020, I decided to give it one more try. My mother was now in a care facility and I’d recently been in a situation where she wanted me to help her use the bathroom. It was an uncomfortable moment to say the least. I decided to write a piece reflecting on how the roles were now reversed, and I was helping her do things she once helped me with. It was humorous yet poignant — the perfect combination to get selected.

Fine. Listen To Your Mother was not to be for me. I came to terms with it. Serenity now.

Then earlier this year, I got an email about the auditions coming up in March. I panicked and signed up for a slot. I picked one of the last ones so that I had a few weeks to write something. While I usually write well under pressure, I got caught up in a bunch of things and a couple days before my audition I realized I had nothing. So, I looked over my earlier pieces and decided, damn it, that piece about procreation was funny! I punched it up a little and auditioned with it on a very snowy March day. The judges laughed as they had three years before. I wasn’t feeling encouraged.

A few days later, I received a surprise email. I’d been selected!

As no one ever says, fourth time’s a charm.

All in all, it was a very nice experience. I met some cool people and got to read in front of an audience of a couple hundred  on a stage that I once watched David Sedaris read his work on. After stumbling out of the gate, I think I did a respectable job with my performance. I got the laughs I wanted, and in a program full of dead mothers, relationship struggles with mothers, and the trials and tribulations of raising a kid (thankfully no dead babies this year!), I served well as the comic relief.

And on top of everything else, I got to keep this awesome headshot. (Thank you NSP Studio!)