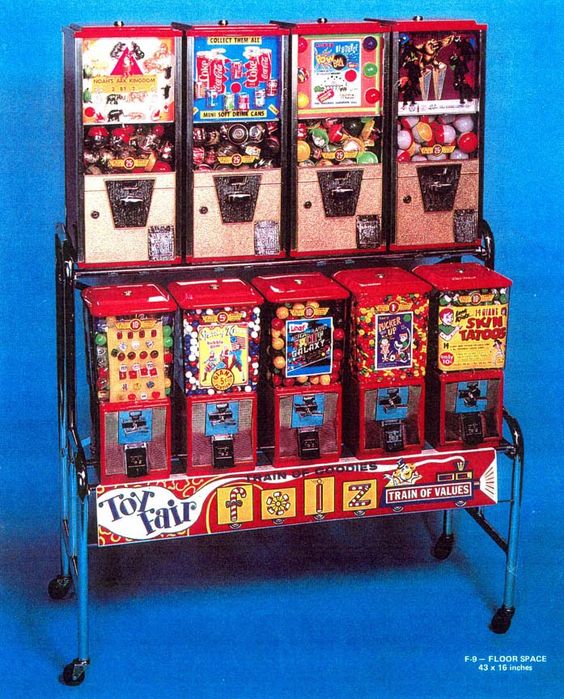 When I was a lad — maybe not wee but definitely still in the single digits — I accompanied my father on a routine trip to our local Fay’s Drugs, a regional drugstore chain. While waiting for him to go through the checkout, I wandered over to the store entrance and to the many red-topped gumball/toy machines wishing I had a coin to exchange for one of the extraordinary delights contained within. This is why children of that age should not be trusted with money: What they lack in financial sense they more than make up for in poor taste.

I’d always twist the big rectangular knobs on the machines even without the requisite coinage, because on more than one occasion, my persistence was rewarded by the unexpected resistance of the handle followed by the clunk of a treat coming to a hard stop against the metal door.

On this particular day, I was having no luck. The handles were spinning with no resistance, and there were no satisfying clunks. I studied the tiers of glass containers holding the various treasures. There were the typical penny gumball dispensers of which I was quite familiar, the nickel gumball dispensers of which I was less familiar, the dime machines which held toys encapsulated in clear plastic eggs which I’d only rarely ever had the good fortune to use, and finally the quarter machines which dispensed clear plastic orbs the size of monkey fists that held treasures so amazing, getting one was like Christmas and your birthday rolled into one. Or so I imagined. Dad was never so inclined to give me a spare quarter to find out.

While I waited for my father to usher me out of the store, I studied one of the quarter machines. I lifted the metal door open and realized that my child-sized hand was about the same diameter as the chute behind it. I should add that this was back in the days before vending machines had any sort of theft-deterrents, such as doors that have a second door attached at 90-degrees so when you lift the first one, the second one blocks your access.

I looked around. There was no one paying me any heed, so I slowly fed my arm up the chute until I came to the dispenser mechanism. I can’t say for sure, but I imagine how it worked was that the plastic spheres at the bottom of the pile each sat in slightly-wider circular cutouts. The cutout containing the next sphere to be dispensed was offset from the top of the chute. When you inserted your quarter and turned the handle, the cutout moved over the chute causing the sphere to fall, and the mechanism came to rest offset again, so no further prizes would be released.

Through the partially-blocked cutout, I could feel a plastic sphere, but there was no way to pull it down. My heart was pounding with a mixture of excitement and terror. I was not the kind of kid who pilfered, well, anything, and I certainly didn’t want to go to jail for this. But at the same time, there I was with Christmas and my birthday at the tip of my fingers.

I quickly scanned my surroundings. No sign of Dad or anyone else. This was also back in the days before cameras surveilled our every move. I fiddled with the plastic bubble barely in my grasp and felt its two pieces separate. A second later, I had the prize tightly squeezed between my fingers, and without it’s oversized protective shell, it easily made it’s way through the dispenser mechanism. I quickly withdrew my hand and studied my ill-gotten gain.

It was a flimsy, brown magnet shaped like a cornucopia with words printed on it. They might as well have been written in Korean since they made no sense to me. They read Count Your Blessings.

I balled the magnet into my sweaty fist as my father appeared and did my best to not look as guilty as I felt — as I was. I think I started babbling about finding it behind one of the machine doors.

“Howdya like that! I just started opening the gumball machine doors, and I found this magnet behind one of ’em! Yup! There it was! Just sittin’ there! I was as surprised as you! So, I took it, but only because it was already there. I didn’t take it in any bad way. I just found it right there! Yup! Just found it.”

I’m not sure my father was paying much attention to what I was babbling. He was probably more concerned about why I was sweating through my shirt.

When we got home, I showed my mother the magnet and repeated my weak story. I suspect she knew I wasn’t being totally honest, though she never let on if she did. I asked her what “count your blessings” meant. She explained “blessings” were the good things you have that you’re thankful for, and “count your blessings” meant to think about and appreciate all of those things. She put the magnet on the fridge (where it remained for the next 45 years). I pondered what she said for a while and “counted” my “blessings.”