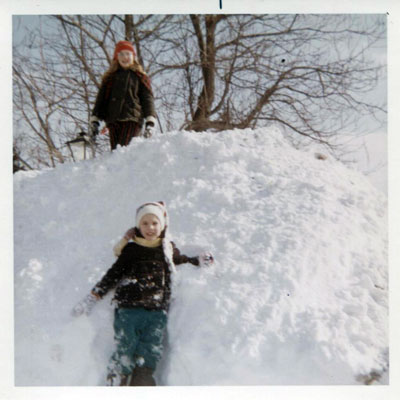 By my current count, there have been at least four times when I almost died. (There were almost definitely other times that I’m forgetting, which may have involved head injuries.) Of course, I don’t know for certain that I would have died in any of those instances, but I think it’s very likely that if things had gone slightly differently, I probably wouldn’t be typing this today. Who knows. Every day we’re in situations where we could easily be killed: distracted drivers, rogue viruses, pissed off food-service workers, but we usually aren’t aware of how close we’ve come to death. The four times on my list were times I was very aware I could have died.

The first time I almost died I was maybe 10 or 11. I don’t recall my exact age or even who I was with — though I think it was John and Mark, two of the many neighborhood kids I played with. It was definitely winter, and I’m fairly certain it was dusk. We were playing on the giant snow piles in the parking lot of the dentist’s office across the street from my house. Growing up in Syracuse, winter started in late November or early December and you didn’t see grass again until March or April. We just didn’t have the constant thaws that our good friend global warming brings us in present-day winters. This meant that snow piles kept growing larger and larger as the season progressed, which was pretty awesome if you were a kid who like sledding and building snow forts. I was such a kid.

The dentist’s parking lot wasn’t particularly large at the time, but it still produced some giant snowbanks after being repeatedly plowed for a month or two. On this particular evening, this was where the boys and I were playing. We had our plastic toboggans and were sledding down these very steep snow piles — sometimes down the side that went into the empty field and sometimes on the opposite side, but at an angle to remain parallel with the road.

At one point, throwing caution to the wind, I dove onto my toboggan pointed perpendicular to the road erroneously thinking I could steer it into a graceful right arc and avoid the road 15 feet away. Let’s just say I got an impromptu lesson in physics. The steepness of the hill, my momentum, and the unsurprising lack of friction between a flat piece of plastic — specifically designed to slide on frozen water — and the surface of frozen water beneath it made any chance of successfully steering the toboggan in any direction other than straight into the road highly unlikely.

We didn’t live on a particularly busy road, but it definitely got busier toward the end of the work day, which it now was. As I deployed my emergency breaking system which consisted of me dragging my boots and mittened hands along the ground, I was happy I didn’t see any cars on a crash course with me and my flimsy ride. This was a false sense of relief, however, since I couldn’t actually see the road to my left due to another large snow pile in that direction. Luckily, my emergency brakes came through for me, and I managed to quickly halt my progress in surprising fashion. In fact, the impressiveness of my sudden stop was second only to the impressiveness of the sudden stop of the car hurling toward me by its driver when a stupid kid in a dark-colored snowsuit suddenly appeared directly in front of him from behind a snowbank at dusk.

If my head wasn’t actually under the front bumper it was pretty damn close. I was staring at tire tread when we both stopped. The driver jumped out of his car as I quickly got up. I don’t recall him yelling; he was probably just very relieved his evening wasn’t ruined. I apologized profusely, and he went on his way.

It took a little bit for the blood to makes it way back into my face and the faces of my friends. We decided to call it a day; it was nearly dinnertime anyway. I wasn’t in a hurry to go home though. I was afraid my mother might have seen the whole thing. She had a way of knowing when I was doing something dumb — like the time I tried to jump my bike over a steep ramp in the back yard and didn’t bother to pull back on the handlebars once airborne. I landed on the front wheel and then did a sort of bike/kid cartwheel. That time I ended up on my back with the wind knocked out of me, maybe a slight concussion, and a few assorted bruises. She somehow saw it all and only commented on it when I came in the house later on. (I was the last of five kids. Once she saw I was conscious and not crying, she probably just went back to whatever she’d been doing.)

I had cheated death on this particular winter day, and I was embarrassed, which, frankly, is a reasonable reaction when caught cheating. I eventually made my way home, fearing the worst, but if my mother witnessed the total of her offspring nearly get reduced by one, she never let on, and I never brought it up. Instead, I vowed to never do something that stupid again, and I’m fairly certain that vow went unbroken for at least a week.