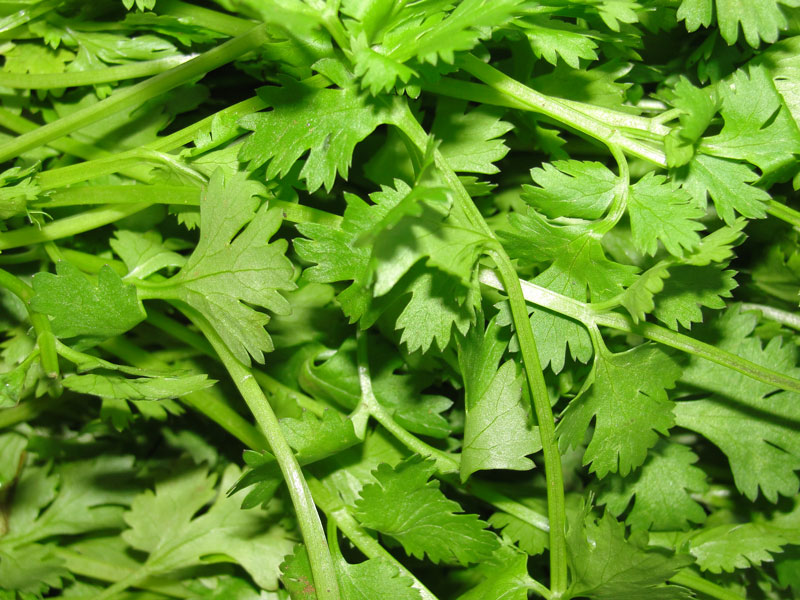 Growing up, there weren’t many herbs and spices in our house. Outside of a couple jars of McCormick onion and garlic powders — which I’m not convinced weren’t the same jars we removed from the cupboard when we emptied the house decades later — there was little else. Salt and pepper were good enough for my family, and I’m pretty sure the pepper was only there because it came as part of the set.

Cilantro would have been considered a foreign substance in the Seifritz house. I can’t imagine a time my mother would have used it, and I feel fairly certain my father would have protested its use. He was definitely a meat and potatoes kind of guy. (He didn’t like Chinese food. It could be because it was too exotic for him or it could be because the few times we had it, it came out of a can. One time he was to be awarded the Silver Beaver, one of Scouting’s highest awards. It was to be a surprise, and it was my mother’s job to get him to the restaurant where the ceremony was to be held. Without any input from my mother, the people in charge chose to hold the event at a Chinese restaurant. The fact that my mother was able to convince him to take her out to dinner — something that was already reserved for special occasions — to a Chinese restaurant is a testimony to his love for her.)

It wasn’t until sometime after college — probably way after — that I first encountered cilantro. I can’t recall what the exact dish was, but at the time, I was fairly certain one of the main ingredients was soap. After that, it was very easy to identify when the leafy green herb was present because it would ruin the dish for me. Calling it Chinese parsley or fresh coriander didn’t make it any less soapy. You might as well have called it Irish Spring for how it tasted on my tongue. I learned what recipes typically included the vile weed and avoided them. If someone asked if I had any food aversions, the list was short: cilantro and olives.

At some point, I was told that people who thought cilantro tasted like soap were “super-tasters.” Now, that was a badge of honor I could wear! If someone asked me why I didn’t like cilantro, it was with great pride that I told them, “Well, you see, it’s because I’m what they call a super-taster.” That would in turn produce more questions with disappointing responses.

“Wow! So, does that mean you can identify all the ingredients in a dish when you eat it?”

“I’ve heard super-tasters can be picky eaters. There must be a ton of foods you hate! What are some of the other things you avoid because of your super-tasting ability?”

“So, you think we’re gonna get that storm they’ve been talking about?”

Around 2010, I decided to research why I reacted to cilantro the way I did when so many other obviously insane people actually enjoyed its taste. I found an NPR article that basically debunked the super-taster theory, though I still ordered a home test kit to see if I was, in fact, cursed with that lame super-power. The test involved chewing on a piece of paper soaked in a special chemical — propylthiouracil, I believe. Super-tasters will find it to be horribly bitter. I recall it being slightly bitter, but not particularly horrid, implying I’m not so much a “super-taster” but rather more of a “taster.”

Around the same time I cast aside my super-taster identity, two of my nieces independently sent me the same NY Times article about cilantro-haters. (I guess I’d made my stance well-known.) The article talked about how the cilantro aroma is created by a half-dozen or so substances, and most of these are modified fragments of fat molecules called aldehydes. These aldehydes give off a soapy smell which most people barely notice, if it at all. Others of us are far too tuned in to the odor, and it’s believed that it’s actually the odor — since odor is so closely tied to taste — that gives certain people their aversion to cilantro.

Interestingly, these soapy-smelling aldehydes are also found in bugs. I vividly remember one evening as a kid finding a swarm of flying ants that very strongly smelled of dish soap. Accordingly, I chose not to eat them.

A couple years after the Times article was published, the ancestry website 23andMe was involved in a study to determine if there was a genetic component to the “cilantro-tastes-like-soap” phenomenon. In the study, 14,604 unrelated participants of European decent were asked if they thought cilantro tasted soapy. Just under 14% said it did. The study then looked for commonalities between those cilantro-haters and found that they shared a common smell-receptor gene cluster called OR6A2. This gene cluster picks up the scent of aldehyde chemicals. Based on this study, I now like to think of myself as a “super-smeller.”

One thing that stuck with me from the Times article was an interview with Dr. Jay Gottfried, a neuroscientist at Northwestern University who had been in the cilantro-is-soap camp. He talked about how as humans evolved, our brains learned to associate certain smells with dangerous substances so that we would avoid them instead of ingesting them. Often our reactions to smells are emotional, and for us super-smellers, cilantro can trigger disgust. Since cilantro isn’t poisonous, however, we don’t need to avoid it. When encountering cilantro in a recipe, Dr. Gottfried learned to overlook the soapy smell/taste. He learned to enjoy the complete dish, instead of focusing on the individual components. In time, he believed his brain rewired itself to not identify cilantro as a bad thing.

I thought I’d give it a try. Instead of running from cilantro-laced dishes, I chose to embraced them, and within a few years, something interesting happened: I began to enjoy cilantro. These days, I actually love it. If I forget to add it to a batch of panang curry, it tastes incomplete. Guacamole sans cilantro is disappointing. I no longer associate it with soap, and these days, I have to really focus on the smell to distinguish it from Italian parsley at the grocery store.

Who knows exactly why this transformation came about for me. I like to think that, like Dr. Gottfried, I’ve trained my brain to positively react to cilantro, or perhaps, like a particularly vulgar kid who’s had their mouth repeatedly washed out with soap, eventually the soap starts to have a comforting taste. (At least I suspect that’s what happens.)

I feel l like I’m letting my cilantro-hating community down by admitting my transformation, and I may get some blow-back, but if I can give one little cilantro-phobic kid some hope, it’ll have been worth it.

I’m still not eating the bugs.